Home » The Ladies and Gentlemen series

The Ladies and Gentlemen series 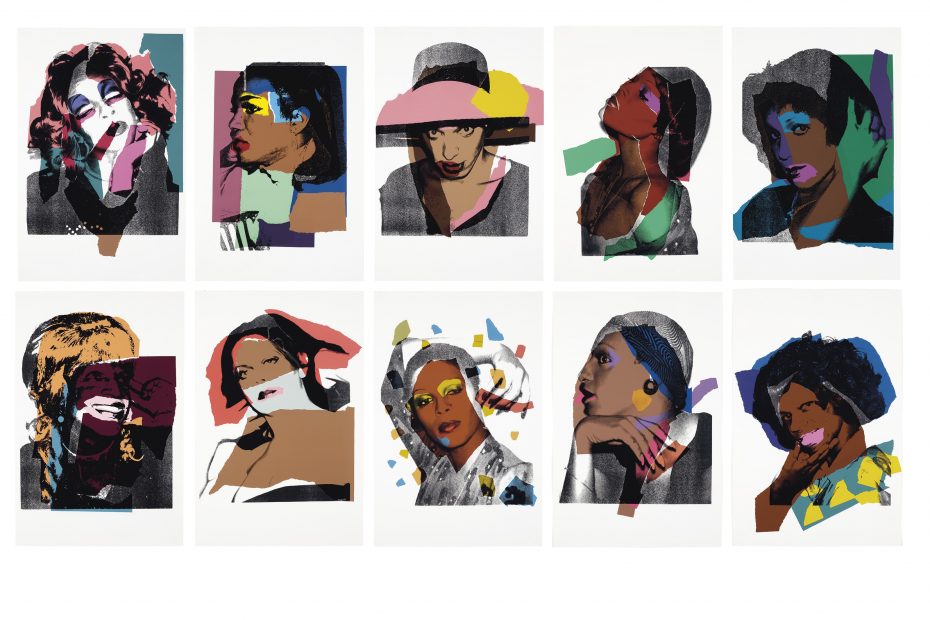 In 1974, Andy Warhol got a $1m commission from Italian art dealer Luciano Anselmino.
The brief he received was to forget the soup cans and superstars that had made his name and “take a walk on the wild side“, creating portraits of New York’s hidden community of drag queens.
This is how one of Warhol’s most touching and less-known projects began: the Ladies and Gentlemen series

Ladies and Gentlemen, screenprint on paper, 1975

“Ladies and Gentlemen” is a series of 268 vibrantly colored canvases, a portfolio of 10 screenprints (edition 125 + 25 APs), several unique screenprints on paper, acetates and >500 polaroids that Warhol used as a starting point to create all the portraits of this project.

When the art dealer Luciano Anselmino commissioned the Ladies and Gentlemen series, Warhol was already too famous to track his models down himself so he sent Bob Colacello – a young collaborator – out to a club called the Gilded Grape in Greenwich Village, NYC, which was the haunt of a largely black and Latin crowd.
That night Bob Colacello identified 14 models, who were asked to be at Andy Warhol’s Studio the following morning.
Unlike the portraits commissioned by socialites and celebrities, Warhol paid these sitters to pose in front of his camera.

“When Andy was working on a series entitled “Ladies and Gentlemen,” a number of transvestites were invited up to the studio to be photographed.

After the photo session, I would hand the subjects a check and send them over to the bank. Usually they would not have any identification, so the bank would call me and ask if I knew a Helen or a Harry Morales!

I do not remember if they knew who Andy was, but the photo sessions were wonderful for every one of them. They were able to do their favorite poses and act glamorous for Andy’s camera.”

The cross-dressers were invited to pose and dress as they wished while Warhol took their portraits with his Polaroid Big Shot camera; the same process he used with the Hollywood starlets and socialites.

They are portrayed in a classical manner from the neck up, their expressions ranging from coquettish to joyful. Many of the portraits are taken at a three-quarters angle, similar to Warhol’s celebrities.

All the portraits are surrounded by energetic shapes of colors, which overlay the portrait itself, printed in black. These portraits capture the charm and vivaciousness of the queens depicted; the viewer can feel the power and personality of their gaze.

Moreover, each portrait maintains the gender ambiguity of its subject. The title itself refers to the gender duality the drag queens embody. 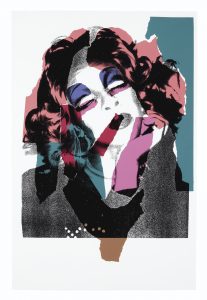 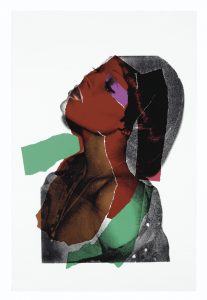 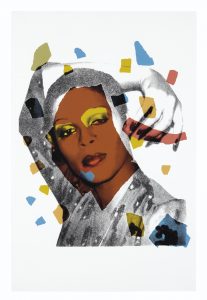 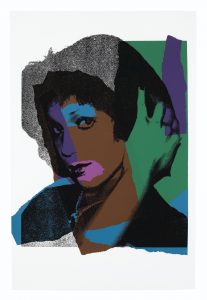 Ladies and Gentlemen series: the sitters

Of the 14 sitters featured in the series, a couple were well known on the gay underground, but most were not. After decades of research, in 2014 the Warhol Foundation published an official list with the names of 13 out of the 14 Ladies and Gentlemen: 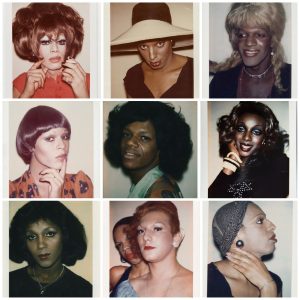 Here’s the story of some of these models, who were famous for fifteen minutes.

After Wilhelmina Ross, Warhol made the largest number of portraits of Panell – 60 paintings out of seven Polaroids.

We know Panell’s identity because she signed her Polaroid, with what is thought to be her birth name.

Not much more is known about her.

Jimmy Camicia, co-founder of the Hot Peaches theatre company recalled, ‘Many years ago, while walking with Marsha [P. Johnson], she stopped to talk to Alphanso… They were friends. My impression was that she was very soft spoken, gentle and kind.’ 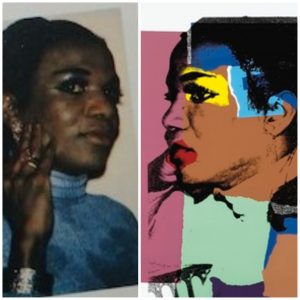 Polaroid and screenprint of Aplhanso Panell

Wilhelmina Ross (Ladies and Gentlemen 130 and 136)

Ross appears to have been Warhol’s favorite model for Ladies and Gentlemen.He made 73 paintings, based on seven Polaroids, 29 drawings, and five collage portraits of Ross.He also created five giant 10-foot canvases of her.

Her name was a mix of the model agency Wilhelmina and Warhol’s close friend Diana Ross.

At the time Warhol made her portrait, Wilhelmina was a leading star in many off-Broadway productions.

At the end of 1974 Ross moved to Puerto Rico, where she lived for ten years. When she learned she had AIDS, she returned home to her mother where she was nursed for the last two years of her life 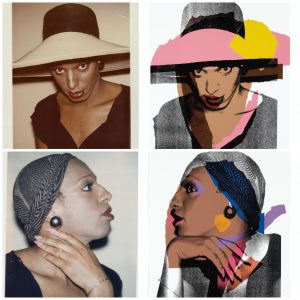 Polaroids and screenprints of Wilhelmina Ross

Marsha P. Johnson (the P stays for “Pay it no mind”, she said once to a Judge asking) is the most famous subject among the Ladies and Gentlemen.

She is believed to have been a key figure in the Stonewall Uprising in 1969, which helped to usher in the gay and trans rights movements.

She continued to fight for LGBTQ+ rights throughout her life, and died in 1992 in NYC. 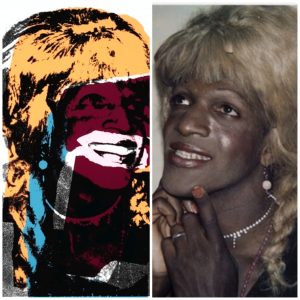 One of the models discovered that night was “a very petite, soft-voiced transexual” called Iris.

She arrived at Warhol’s studio wearing a pretty little wig but then also posed for some of the pictures without it.

Iris features in 2 of the 10 portfolio screenprints, with and without wing.

She had a missing tooth, which Warhol painted back in her portrait. She was happy. “Andy gave her back her tooth”, said a friend.

We know very little more about Iris’s life, she was famous just for a day. 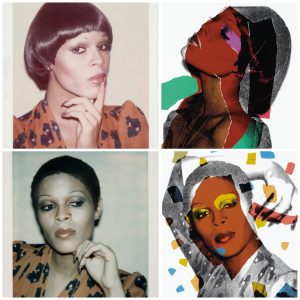 polaroids and screenprints of Iris

Warhol created 19 paintings of Broadway from an original selection of 47 Polaroids.

She signed one of her Polaroids (so we know at least her name) but we don’t have any more information about her. 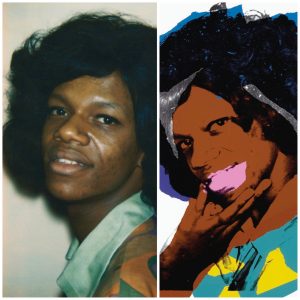 polaroid and screenprint of Broadway

We use cookies on our website to give you the most relevant experience by remembering your preferences and repeat visits. By clicking “Accept All”, you consent to the use of ALL the cookies. However, you may visit "Cookie Settings" to provide a controlled consent.
Cookie SettingsAccept All
Manage consent

This website uses cookies to improve your experience while you navigate through the website. Out of these, the cookies that are categorized as necessary are stored on your browser as they are essential for the working of basic functionalities of the website. We also use third-party cookies that help us analyze and understand how you use this website. These cookies will be stored in your browser only with your consent. You also have the option to opt-out of these cookies. But opting out of some of these cookies may affect your browsing experience.
Necessary Sempre abilitato
Necessary cookies are absolutely essential for the website to function properly. These cookies ensure basic functionalities and security features of the website, anonymously.
Functional
Functional cookies help to perform certain functionalities like sharing the content of the website on social media platforms, collect feedbacks, and other third-party features.
Performance
Performance cookies are used to understand and analyze the key performance indexes of the website which helps in delivering a better user experience for the visitors.
Analytics
Analytical cookies are used to understand how visitors interact with the website. These cookies help provide information on metrics the number of visitors, bounce rate, traffic source, etc.
Advertisement
Advertisement cookies are used to provide visitors with relevant ads and marketing campaigns. These cookies track visitors across websites and collect information to provide customized ads.
Others
Other uncategorized cookies are those that are being analyzed and have not been classified into a category as yet.
ACCETTA E SALVA